Despite popular opinion, planting orchids really isn’t all that difficult providing that you follow a few tried and true methods – so how do you get it right?


Orchids, or the Orchidaceae family, are a diverse and widespread family of flowering plants, with blooms that are often both colourful and fragrant. Along with the Asteraceae, they are one of the two largest families of flowering plants – so much so, that they are often purchased as a decorative alternative to a bunch of flowers from your local supermarket or florist.

However, for those looking to keep these creatures alive for longer than a few weeks, planting orchids can be somewhat of a mystery. The good news is if you’re able to master their ongoing care requirements, expect to be rewarded with blooms for years to come.

The Basics Of Caring For Orchids

Orchids are usually grouped into two broad categories that generally characterise their growth habits and patterns. Monopodial orchids have a single, upright stem, with leaves arranged opposite each other along the stalk of the plant. The flower stem appears from the base of the uppermost leaves. Orchids with this growth habit include the phalaenopsis and vandas.

In comparison, the more common growth habit is sympodial. These orchids grow horizontally, sending out new shoots from the old rhizome. Leaves and flower scapes form at the top of the new shoots. Many sympodial orchids form pseudobulbs, which are swollen shoots that store water and nutrients to help the plant survive periods of prolonged drought. Sympodial orchids include cattleya, cymbidium, oncidium and dendrobium.

With over 30,000 different species of orchids present in the world today, it’s all but impossible to give general care and cultivation instructions. However, how an orchid physically looks can often provide clues as to its preferences regarding light, water, and growing medium. When it comes to creating the best possible environment for planting orchids to thrive in the long term, aim to provide the following as a general guideline.

Light – As a general rule, orchids are relatively light-hungry plants, and they should have access to 12 to 14 hours of light each day. In a tropical environment, the duration and intensity of natural light does not vary as much as it does in temperate climates. For this reason, you may need to move your orchids around, and supplement with artificial light to keep them happy during the winter months. Aim for a south or east facing window whenever possible, as west facing windows can get too hot, and north facing windows can be too dark.

Growing Mediums – Terrestrial orchids, such as paphiopedilums and some cymbidiums grow in soil. However, most tropical orchids are epiphytes, which means that they grow in the air instead. Their fleshy roots are covered with a layer of white cells called velamen, which acts as a sponge to absorb water, while the coating also protects the roots from heat and moisture loss. Try planting orchids in peat moss, fir bark, dried fern roots, sphagnum moss, rock wool, stones, coconut fibre, lava rock or a blend that combines several of these materials. For these types of orchid, the lighter (or more aerated) the growing medium the better!

Watering – Nothing spells the kiss of death for an orchid faster than letting it sit in a waterlogged pot – without adequate air circulation, the plant will simply suffocate and die. As a result, most orchids can tolerate drought conditions far better than they can excess moisture. To keep them happy, orchids should be watered once a week. The growing medium should be allowed to dry out between waterings, and excess water should not come in contact with the roots or the growing medium. After being repotted, water very sparingly during this readjustment period.

Humidity – Most tropical orchids prefer humidity levels of up to 60 to 80 percent. With the winter-time humidity level in most homes hovering closer to 30 percent, orchid growers have been known to deploy the use of a humidifier, or set their orchids on rubber grids set on waterproof trays, or even gravel-filled trays filled with just enough water so it doesn’t touch roots. Some orchids also benefit from being misted. Whatever you do, always keep orchids away from hot or cold drafts that can drastically change the temperature. Finding a protected but sunny area in your yard will help to combat these changes in temperature.

Potting – When planting orchids, it’s important to know that they loathe being repotted, and will often not flower for up to a year after being disturbed. Oddly enough, they’re also often at their best when in a relatively small pot, and often prefer plastic. To ensure good drainage, you can fill the bottom inch or two of the pot with foam “peanuts.” When potting, gradually fill it with your growing medium of choice, ensuring that the crown of the plant sits a bit below the top of the pot. Sometimes it’s helpful to use a bit of wire to secure the plant until its roots get established.

People tend to love planting orchids because of their unique and visually appealing blooms. Unfortunately, they usually do so once per year, and remain in bloom between six and ten weeks. However, they’ve also been known to bloom more often if they’re particularly happy with the conditions in which they reside.

One thing that many green thumbs are often unaware of when trying to encourage happy orchids is that their growing mediums are often quite low in natural nutrients, which means that it’s up to you to provide a fertiliser. While it should only be applied during active growth periods, they’re particularly fond of seaweed – but what are options for products that include this? 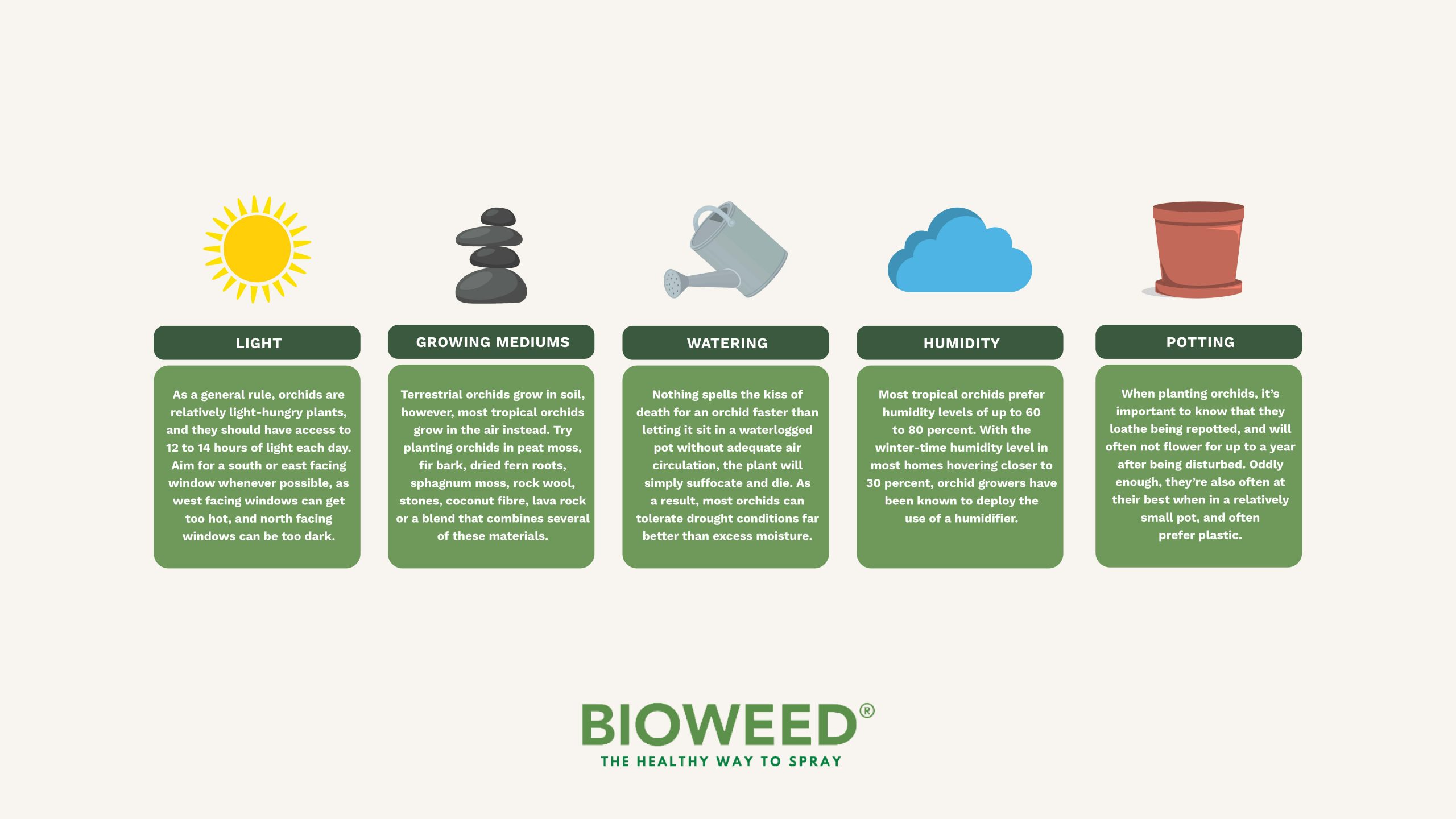 Biotic Booster provides the perfect boost for both your orchids, garden and soil, and is an environmentally safe means to improve natural tolerance to heat, drought, frost, pests and diseases. Each bottle includes a special blend of humics, fulvic humus and seaweed extract, all working to provide vigorous and healthy plant growth with enhanced flowering and root system development.

If you’re ready to give Biotic Booster a try, and introduce it to the flora that you share your home with, be sure to water your plants thoroughly beforehand to assist with absorption. For best results, simply pour the recommended amount directly onto the soil, ideally around the base of the plant.

At Bioweed, we specialise in organic solutions to ensure that your garden reaches its full potential the natural way. Our range of products are all chemical free, and are providing Australians with safer products to use both in their gardens and in their homes. Based on the Sunshine Coast, our range has been embraced by people from all walks of life, and are backed with twenty years of research and industry knowledge.